COVID-19: A blessing for nature 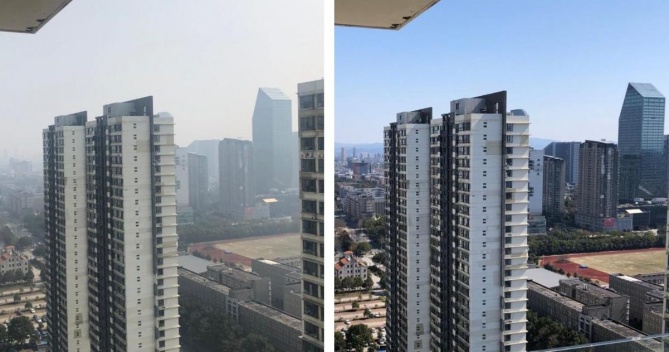 At The beginning of the pandemic of COVID-19, the whole world immerse itself in an enormous “fear”; sadness was visible on every face, mouths did not express anything but dismay. Means of communication transmitted terrible messages all day long: thousands of people were dying every day and hundreds of thousands got infected. The future seemed the worst. Finally, we were getting closer to the end of the world. Scientists, in accordance with the sanitary authority, applied restrictive measures to save humanity: lockdown, use of masks, washing hands frequently with water, soap or disinfection with alcohol-based gel, social distancing among people, closing of air, land and sea borders…these temporary measures have permitted to cushion the virus’ devastation while more efficient solutions appear, such as a treatment and vaccine against COVID-19. Negative effects of this pandemic are easily seen and recognized around the world according to what we see from the different means of communication. However, beyond the damages that this health crisis has caused, we cannot omit the positive consequences it has had for the planet in general, especially in the nature and in the world’s biodiversity.

POSSITIVE EFFECTS OF COVID-19 IN THE NATURE

In 2015, Pope Francis in his encyclical “Laudato SI” rang the bell for saving the “common house”, which is our planet the Earth. This message sounded as a thunder, but it had little positive effect. Many initiatives have been taken to protect the “common house”, but still there is a lot to do. Without human will, this pandemic has given an impulse for conserving the world, balancing ecosystems.

Many human activities affect the climate, such as gas emission from industries and vehicles, poor or waste management and abuse of nature. These activities have diminished considerably after lockdown, provoking a significant reduction of gas emission, especially CO2 (carbon dioxide) and other greenhouse gases (nitrogen dioxide and methane). As a result, we note a reduction of air pollution and global warming. According to a document published by NASA, Fei Lui, a researcher of air quality of Goddard Space Flight Center, stated that “It is the first time I see something so dramatic in such an extensive area for a specific event.” In addition, we know that many of these industries and vehicles are large consumers of oil, so the reduction of their operations also leads to an oil exploitation’s reduction. Thus, Earth could benefit itself of its own subterranean hydrological resources.

Usually in some cities, streets are full of garbage and any type of waste on the ground, which makes the city an ugly, horrible and malodorous place. These wastes, largely a work of men, also contribute to increase air pollution. During lockdown, garbage has been stored at home and then it is deposited on appropriate trash cans. This way, streets are cleaner, and you can appreciate the beauty of the city as well as breathing a cleaner air. One of the biggest benefits of this measure to fight against COVID-19 is pollution’s reduction, which means, a significant improvement in air condition, helping to take care of ecosystems and human and animal health.

In addition to the reduction of air pollution, this human “hibernation” has also reduced significantly noise on seismic background and mining. The planet tends to vibrate to the rhythm of human activities and vehicles (cars, trains, ships, planes, etc.). Recent seismic studies show that since the beginning of quarantine the Earth has had less seisms. When seismographs are less disturbed, they are more efficient and allow scientists to develop more advanced researches in the aftershock places.

Biodiversity’s recovery is another positive visible effect of COVID-19’s crisis. In fact, many infections in animals, such as Ebola, AIDS and CORONAVIRUS are transmitted to people through close contact with some wild animals. On the other hand, coronavirus es transmitted by pangolins, an animal that is endangered because of animal trafficking due to its squama and meat.

To avoid major contagion risk, Chinese government has prohibited consumption and exploitation of this animal and many others. Thus, these animals will have a break from hunters and will be able to live better in their ecosystems. Containment after pandemic diminishes illegal hunters in the whole world, allowing animals to move freely in their environment, live peacefully and reproducing themselves, which means that there will be an increase number of animal species.

After quarantine, some animals, especially strange ones such as snow leopard, take advantage of this calm and get out of their hiding places and can be observed near a park. An example of this was the snow leopard seen in Saylyugemsky National Park in Russia. There is also some peace around zoos, where animals were not calm due to the multiple noise provoked by visitors.

Positive effects of COVID-19 are also visible in the aquatic world. During lockdown, maritime activities have been reduced and we can appreciate a significant change, such as the one occurring in Venice, where canals waters that are usually dark, became lighter. Aquatic species such as dolphins can be seen easier due to the calm of their environment. There are few tourists on beaches, so less waste is thrown to the water. Fishing activity reduction offers a truce for aquatic species, allowing them to reproduce themselves.

Vegetation should not get over during this health crisis. With the purpose of getting protection from COVID-19, people are invited to stay at home. Then, they can use the energies they use to external activities to activities at home. Thus, many are dedicating themselves to create or mantain a garden or orchard at home. Trees from the forest are resting during the pandemic because deforestation has been reduced.

Human activities reduction is a direct consequence of this pandemic and it is the root of all these healthy environmental effects, especially in terms of weather and biodiversity.  For this reason, we realize that we cannot separate health and ecology because health is connected to the climate. However, we must make an effort to support sustainable economy. After the crisis, we must avoid repeating bad habits such as producing harmful substances for agriculture and plastic containers. We must promote the use of renewable energy.