THE ACCOMPANIMENT OF YOUNG XAVERI IN THE PARISH SAN JUAN BAUTISTA 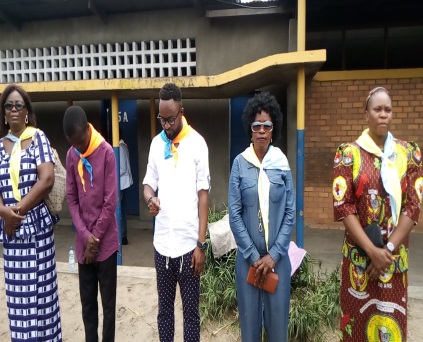 I arrived at Betania community and some months later I was visited by young people from Xaveri movement asking me to join them.

I did not doubt to submerge in this adventure of working with young people from Saint Jean-Baptiste parish, so then together we could trace our lives following Christ’s example.

Xaveri movement was born in Bukavu on September 7th, 1952 by an initiative of revered Father George Defour, who was a missionary in Africa (white father) in collaboration with young people from Zaire (Congolese) of Bukavu.

They were 40 young people and the movement had taken the name of VIJANA WA KRISTO, which means young people of Christ.

Father Georges Defour wanted to supervise young people by inspiring himself in Saint Francis Xavier as his patron saint. He was based on the charity law: Pity Spirit, devotion, fraternity, free deliver of himself towards human community, bravery, and ministry.

It is a catholic action movement for young people and adults.

Committees could be created to facilitate the development of a group activity. The committees created are:

In the celebration of Saint Francis Xavier, on December 3rd, all young people from Saint-Anoine de Padoue (Sainte-Claire, Saint-Clément, Christ-Sauveur) deanship got together in our parish (Saint Jean-Baptiste) for the festival and specially to support those who have to commit with the group. A promise by which young people commit themselves to be good Christians, faithful to Christ, their group, their church, and promise to serve God.

An encounter of more than a hundred youngsters according to their sections: young people (joyful, passionate, and radiant people), group leader, ring group (those who have just got married), parents councils, companion, and the priest.

A great joy of reencounter, dancing, games, and other activities.

The group keeps its specialty of helping others to become good Christians.

I continue my ministry this way, among its youngsters.