MY EXPERIENCE IN MOSAIKO WITH THE COMMUNITIES 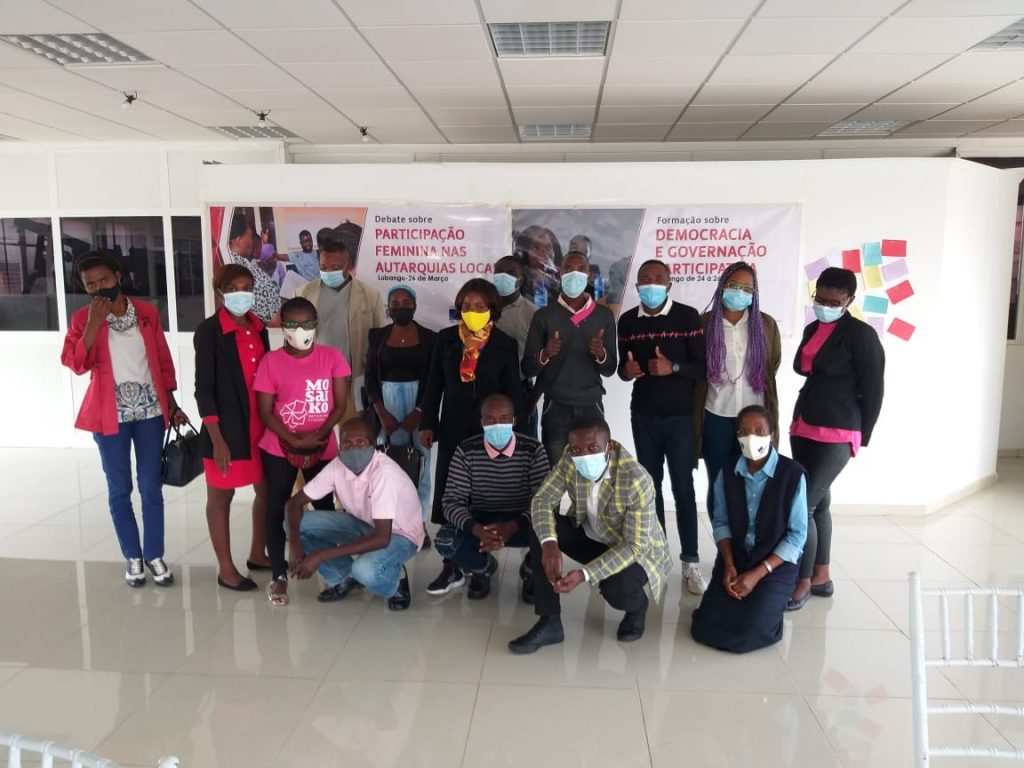 Sister Maria Fernanda launched a call some time ago inviting us to write something to share it on our web page of MDR.

The difficult part of that is to sit and organize the ideas of what we expect to share with the sisters due to our “excess” of duties. Meanwhile, I encourage myself to write this brief article to talk a little bit about my experience with communities and groups while I worked in Mosaiko.

For those sisters who do not know, Mosaiko -Instituto para la Ciudadanía (Institute for citizens)- is an organization founded by Dominican frays in 1997 in Luanda with its headquarters in kilometer 12 in Estalagem neighborhood, Viana county. In its commitment to “contribute for a better country, a country that is built with a little bit of all of us” (as philosophy of work), develops a majority of work outside of Luanda, in the whole country with the purpose of promoting citizens who are conscious and active and that implies knowledge and recognition of their rights and duties, considering that “nobility of a country is measured from the nobility of its People” and the respect towards human dignity is and must be the base and foundation of each society.

With the declaration of State of Emergency imposed due to the pandemic COVID-19 and the imposition of a sanitary barrier in Luanda with the motto “Stay at home” in March 2020, Mosaiko and its collaborators saw their dream fade because as a nonprofit organization, we thought nobody would keep on funding and supporting projects that were no longer under execution. We were all confined and disoriented because we did not know neither what to do nor when this situation would be over. We were obliged to go “on vacations” without leaving home while the board was drawing up strategies for implementing the teleworking system. Of course that for some specific areas where working on the headquarter is a must there were almost no work to compensate to justify their salary, which forced the board once again to sit and check what policies to implement through negotiations and renegotiations with employees and other financial institutions involved in projects that were under execution.

For some of us who work in the protection of Human Rights and legal counseling area are now offering remote counseling by phone.

How was developed the counseling procedure? The information and publishing department (DIE in Portuguese) published information including contact details and emails of Mosaiko in the Mosaiko’s Facebook profile so people could register and give their contact details and concerns. The person who performs the role of administrator in the Facebook profile page distributed people’s contact details to each of us (lawyers) and that way we could provide remote counseling. We sent reports at the end of each week. To ensure efficacy, treasury provided a certain number of cards to facilitate the applications.

Once this stage was over, another remarkable experience that happened was when the Public Disaster Situation was announced, which allowed institutions to retake the regular work routine but following some measures such as: obligatory use of masks, alcohol gel and maintaining social distance.

For us, trainers and lawyers, it was time to go out and meet the communities and the Local Group of Human Rights (GLDH in Portuguese), partners of Mosaiko. It was October 2020. The Government Board convene a meeting and asked these questions: How are we? Who is prepared to go? Do we feel brave enough for trying, pass the sanitary barrier and work with groups outside of Luanda?

Though we felt fear and uncertainty -because we did not know what the reaction of people would be when receiving visitors from Luanda, the epicenter of COVID-19- we answered yes, and we prepared ourselves for this test. The date and time of the test were stablished. There were seven of us. And now, who would be the first to try? We were all afraid of testing positive in our Covid-19 tests, which meant to end up staying in a medical center following a quarantine and a forced isolation. One of my colleagues said: “Sister Ima you are the oldest of the group, you go first.” I went and I provided all my personal data to proceed the blood test, whose result was negative, which meant that I could travel. Finally, the whole team took the test and could travel to the provinces of Benguela and Huila.

For some people, our arrival made them happy, because it meant a time for retaking the formation with Mosaiko as well as an opportunity to set out their concerns about violation of human rights by some institutions and organizations of national security and defense, specifically National Police and Armed Forces during quarantine.

For some other people, our arrival meant a menace, a contagion risk. For that reason, they demanded our results of COVID-19 tests. We showed them the results to make them sure that we had met all the procedures.

In conclusion, I would like to say that working with communities from the inland is a little bit tiring because of their location. It is necessary long days of journey and bad conditions, but at the same time is gratifying. It is gratifying because they are places where almost nobody wants to go since many believe there is nothing important to see, nothing that fills their pockets.

For some communities -even today- think that human rights are exclusively for civilized people, people from cities, who have “level”. To have access to information, energy, drinking water, to participate in a training session about the right of birth registration, education, etc. are thing that are available for some people. This is something that is very noticeable among women, who are never considered, and when they are, they do not say a word because they still think that only men must talk and women must be quiet.

In the last years, our formation has been based on inclusive public policies with a greatest focus on gender topics, instill people, help them to realize that a countryside mother, a “zungueira”, a child who sells cigarettes, coal, who herds cattle or polishes shoes have opinion and that they have the same dignity and rights. It is a constant battle.

To me, as human rights trainer, the fact that I can speak to people from different levels of knowledge and social status (local government representatives, academics, and humble citizens of the community). It has been a challenge and at the same time a great opportunity for learning, growing and calling the attention that the country will only work by letting people to participate and their contribution (men, women, teenagers, governed people and rulers.)

I am in favor, I fight and will fight for a better world, fairer, without discrimination by the color of the skin, language, educational level, nationality, economic condition and I want to finish my text by using Martin Luther King’s core idea “What does worry me? It is not the scream of evil people, but the silence of them…” linked with Saint Paul’s text in his first Letter to Corinthians 9, 16 “…For when I preach the gospel, I cannot boast, since I am compelled to preach. Woe to me if I do not preach the gospel!”

Thank you for your patience and attention!