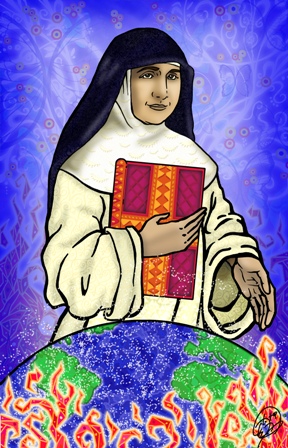 A woman who left behind her land and securities

Ascension Nicol was forty-five years old when she embraced the missionary challenge proposed by Monsignor Zubieta of going to the Peruvian jungle and being able to contribute her gifts and extensive experience in favor of the education and formation of girls and women from the jungle. The context she will face would be totally different to the school of Huesca. However, her deep fidelity, her restless and attentive spirit to what god wanted for her pushed her to offer her life to the cause of the kingdom.

A woman who dares to enter in the Peruvian jungle

“We have experimented great comfort during the trip, especially considering that we were the first women who traverse it…”

Ascension Nicol along with Aurora Ardanaz and some Dominican brothers -after multiple difficulties- started the journey that would last almost a month and that it would lead them to this very awaited mission.

Neither hard and dangerous roads, the altitude and the cold weather of the mountains nor travelling on fragile canoes intimidated them. On the contrary, these challenges strengthen their desire to get to their destination.

Ascension turned the missionary route into an opportunity of contemplating God’s presence in the beauty of the landscapes and her heart expanded when she experienced the first encounters with native people.

A woman who shares her life with native people

“On October 24th a woman from the Marchiguengas tribe passed away. She was the mother of a little girl who was living in our boarding school”

Ascension Nicol and her companions little by little are getting into the Jungle life. They visit families, bring medicines to sick people, train women to house chores and urged them to send their daughters to school. They feel a deep compassion towards native people’s poverty and abandon on behalf of authorities. She stands in solidarity with the denunciations that are made by the Dominicans towards the abuses and the injustices that suffer native communities on behalf of rubber gatherers.

Ascension opens herself to a new spirituality, an experience that lays the foundation of her options, dreams and sacrifice. She experiments God deeply in the missionary life and she is able to discover his presence in every event, in the Cross and in the Easter. Her life -based on Jesus- nourishes her preaching and faithfulness in the Word. Her confidence in God becomes stronger and patience to face tempests and crosses that she finds on the road, the mission adversities and incomprehension.

A woman who believes in women and educates them

“Today a girl from Río Piedras has been brought to us and I have been told that there is another one, who form a good but disjointed class”

Ascension, who is an educator by vocation, wishes that jungle girls receive a good education. For this reason, she manages to create a boarding school. She starts classes with 23 girls from neighboring villages and farms. Mother Ascencion unfolds all her knowledge and talents to educate well her students, because she is certain that education is the road of transformation. She is witness of women’s marginalization and lack of conscious towards their formation.

A woman who develops a new project

Ascension and Monsignor Zubieta decided to found a new congregation, whose name would be Missionary Dominican Sisters of the Holy Rosary. Thus, the charisma prompted by the holy (?) spirit of preaching the gospel to the most needy and abandoned people of the Christian instruction would have continuity.

A woman who goes beyond borders

“…despite of all, I do not know what type of well-being and consolation are felt in China that you don’t want to leave it”

Ascension has a wide vision and her missionary horizon has no limits. For this reason, she assumes the challenge of founding a missionary community in China accompanied by two sisters who will be responsible for the mission. Ascencion transmits her experience and strength towards adversities.

A human, communitarian and fraternal woman

Ascension is distinguished by her kind relationship, patience and tenderness towards the sisters who she lives with. She manages a community in which there is a unity and simplicity atmosphere. These fundamental attitudes revealed her coherence and urgency to build mature relationships that stimulate her missionary commitment.

Missionary in the Philippines

“Woe to me if I do not preach the gospel!”

Ramon Zubieta, who was eager to preach, lived his first missionary experience in the Philippines. He is an open missionary, who combines faith and human promotion, wishes to embody himself and to know the culture of the communities which he must confront. He learns their languages and customs and spends a lot of time speaking to them. He promotes health, education and improvement in farming.

Due to the independency movements within the region, he was taking as prisoner along with other companions suffering from starvation and torture, but finally he is released.

Missionary in the Amazon Jungle

“There is a wealth in this region that for the missionary is the most significant: the innumerable tribes that inhabit the valleys”

Ramon Zubieta begins his mission by knowing the reality of the jungle. He faces its impressive, unknown and dangerous geography with scarce and rudimentary means, which neither facilitate transportation nor communication. His creativity and love to the people help him to get closer as a friend. During this process it is revealed his great humanity and respect towards people.

“Native people know that the missionary will not be his landlord or master, but a loving father who will protect them against all the abuses that they suffer in many places, where there is no other authority than brute force”

Thanks to his deep spirituality and Dominican compassion, Ramon is able to perceive injustice and abuses that native people suffer due to the rubber exploitation, where they were captured and taken to camps to work. Ramon denounces these facts to the authorities and demands protection towards native people, who are treated as beasts and many of them are killed or they are made slaves.

A missionary who values feminine contribution in the mission

“I was deeply touched by the situation of women in the jungle. From that moment the idea of solving so much vileness stuck in my mind and I could not see any other way than introducing the collaboration of religious women in the apostolate of the mountain”

Ramon perceives the decisive role of women in the evangelization and formation of the women of the jungle. For that reason, he goes to Huesca to look for religious women for this courageous project, who were able to assume the difficult conditions to get in and to live in the jungle.

A missionary creator of communion

Ramon Zubieta is a deeply communitarian man, who is able to organize, accompany, inspire and encourage creativity and common efforts. He promoted fraternal life as well as he tried to unite the missionary community to have a joint look in the missionary project.

A missionary with an embodied spirituality

“I don’t talk about stillness or joint prayer. That’s for contemplative, quiet, and calm spirits. Mi soul is warmed by any type of suffering or tribulations and it contents to join God obeying his divine will”

Ramon Zubieta nourishes his spirituality through every missionary experience he lives as well as difficulties, sorrows and joy. The encounter with native people is a reason for thanksgiving. He knew how to discover the constant and loving presence of God in things, situations and people he found.

A missionary who has a future vision

Ramon founded the congregation along with Ascencion Nicol. It was a work created with love, carefully accompanied and driven by optimism and hope. His faith in female missionaries was a shining lighthouse that provided certainty about the formation and evangelization of jungle women would be the transformation of the family and society. The fulfillment of Monsignor Zubieta’s dream was guaranteed by the foundation of the missionary congregation. 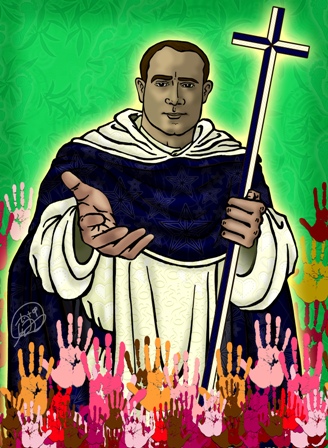