Dear Sisters, I would like to begin my reflection on our Father Founder by recalling the Spanish proverb: “It is well-born to be grateful” to which I subscribe. This centenary year of his death is a good opportunity to recall his Personality, his Life and Spirituality, to interiorise some of his most audacious experiences, to appreciate also his dreaming capacity to design missionary projects in favour of the life of the Peoples where he carried out his mission, and to value the firm and courageous decisions he had to take throughout his life. I will retrace his missionary history, on which I would like to reflect and deepen his life. All this, with the idea of living this year of his centenary with great enthusiasm, hope and joy, looking from the heart and faith, I would also like to communicate my experience.

My reflection will focus on the MISSIONARY dimension, simply because we must limit ourselves, although everything that refers to the Father Founder is of great interest to us.

Ramón Zubieta was born in Arguedas, Navarra in 1864. Personally, I got to know him through the booklet written about him by Sister Isabel Martin-Tesorero. So from the beginning I have a beautiful image of his childhood: that of a cheerful, kind, good-hearted, noble, healthy, sensitive to help others and respectful in his family environment, which instilled in him human values and the Christian sense of life. These Values marked him forever, because they took root forming the strata of his “deepest being”, from his earliest childhood. From an early age, he wanted to become a Dominican priest. He had a particular devotion to the Virgin of his region, Our Lady of the Yugo, the Eucharist and he was very fond of the missionary Rosary.

His dream was to go to China, but he was posted to Philippines. In the context of the Philippine war, his life was in danger and he had to go into hiding, taking refuge in the forests where the “Igonotes”, the aborigines of the island of Luzon in the Philippines, lived. Father, with his warm and friendly manner, was a great support to his fellow prisoners in the jail.

Ramón Zubieta was a great missionary with a missionary spirit, because that is what he was, with a frontier, profound and prophetic SPIRITUALITY and a great sensitivity and capacity for organisation and planning in practical life. A clear spirit to outline his objectives that led him to achieve the goals he set for himself. With his kindness and sympathy, he always sought ways of friendship with the people in general and, in this case, with the Filipinos. Not infrequently he had to renew his missionary option at different times, motivated by the progress of the mission and because the poor needed him. He was also a source of inspiration in the mission of the Church. Because of his plain and simple character, he was respected and loved by all.

Once released from prison, sometime later, he was appointed Bishop of the Vicariate of Puerto Maldonado; unknown territory and traversed by rivers that were difficult to access, through which he sailed to bring the Good News to those tribes, bringing them the development that would gradually become integral in that area. He travelled over a large part of the geography, and set up telegraph and telephone lines to establish communication between the Peoples. In fact, it was in Amazonia that he deployed his evangelising potential and made a great effort to reach out to the indigenous people: he learned their languages and created dictionaries. “I spent hours with the natives, young and old, trying to build up a vocabulary of their language”, says Fr Zubieta.  And one can only imagine what such a big job entails.…

The Peruvian Government recognised his audacity and ability to face risk, and awarded him for his merits as a discoverer and for the help he gave to the human groups he encountered in the jungle.

With an enterprising, risk-taking and hard-working spirit, he built bridges, convents, churches, where he himself acted as architect, master builder and even labourer. What difference does it make to a missionary, all work dignifies a person!

A GOOD father, who together with the Sisters opened the way because they loved their people. Father dreamt and wanted a different society for the inhabitants of the jungle and wanted to make visible this abandonment of the Communities. He walked with the indigenous people in their difficulties, he did not spiritualise situations in the face of evil, because what God wants is for man to be happy. That is why Msgr. Zubieta defended the human rights of the indigenous people and their dignity as children of God, because they were exploited by the rubber tappers, sold their children and women and treated them as slaves.  So he addressed the rubber-tappers and told them: “We oppose the raids, which are the scandalous trafficking of human beings”.

The Father, faced with such a deplorable situation, decided to go for the EDUCATION of the children of the jungle, and there he also learned about the painful reality in which the women lived, whom he always appreciated and valued so much, and he decided that the presence of the Sisters was indispensable in that environment, where development had not yet arrived. So he “set to work “: he came to Spain looking for Dominican Nuns who would voluntarily go to that mission. He arrived at the convent of Huesca and found some Sisters, among them Mother Ascensión Nicol, who would later become our Foundress.

A missionary OPEN to life, to people, his openness and creativity has always been constant in his life. With a great vision for the FUTURE, he undoubtedly wanted to ensure his evangelising mission and for this, he realised his “star” work: the foundation of the Dominican Missionary Sisters of the Rosary, which allows them to spread throughout the world (he does not confine them to his Vicariate) and to seek out the poor, to help them out of their poverty. Whatever it is: material, moral, social, religious. ….

Finally, he was a man of “LOVE WITHOUT MEASUREMENT “, as the title of the Bulletin of his Centenary states: founded on gratuitous giving, from which his freedom is derived. He undertook his mission until death, guided by obedience and the conviction that God wanted it that way. “May it be done as God wills,” he often said.

He died in the breach in Huacho in 1921 at the age of 57. He did not want to take time to recover his health. He left a mark of generosity and compassion wherever he went, because he knew how to recognise the Face of God in the natives.

During my stay in Africa, Democratic Republic of Congo and Cameroon, I had the opportunity to teach several Social Encyclicals of the Church in formation groups; I will mention only one, which was very well received by the missionaries: “Populorum Progressio” by Pope Paul VI (March 1967). Among others, its no. 11 speaks of the Church and the Development of Peoples. At that time, I was in my youth and I would like to recall the impact it had on me. When I compared the content of this point and others, and the distance in time with the work carried out by our Father in the Peruvian Amazon jungle, I felt an immense joy and deep pride to see that more than 60 years before the publication of the Encyclical, Fr.  Zubieta had been a pioneer of integral development in that area: he had created structures, he had worked on humanisation, he had brought education, and he had put the person at the centre of everything. From his Christian conviction, he worked on evangelisation, bringing the Good News and the faith in Jesus Christ to his brothers and sisters.

I must confess my joy to have Pope Francis and his fraternal and universal vision, his determination that human rights be respected in equality with all people, without excluding anyone because we all have the same dignity: migrants, the poor, the marginalised, the excluded, the ill-treated, and the ignored. I see many similarities between the present Pope and our Father Founder: Respect for the sacred dignity of life, his open and clear language, his universal vision of humanity, his love that is affectionate, tender, open and without frontiers, which goes beyond his culture, nation, continent and his love for the poor, the marginalised, the needy. To live in TRUTH, without self-deception.

Truth is an inseparable companion of Justice and Mercy”. #227 ( Fratelli Tutti )

Today, the Covid-19 pandemic has also revealed situations of marginalisation, fragility and vulnerability of the poor, the lack of health equipment and resources for all and Social inequality between countries and continents. The mission is always there to be fulfilled in the day to day of our existence, until eternity, and so it is for all of us. What have we learned from this situation this year? Hopefully we have learned to be brothers and sisters to everyone and that “The Neighbour “is everyone who needs us.

What is important is to meet Jesus who gives meaning to our whole life, to commit ourselves to his Project and to recognise his Face in each brother. This is exactly what our Father did. May his example help us to be authentic missionaries in order to generate FRATERNITY, LIFE and EQUALITY in our environment. Help us to create a more dignified world, without hunger, poverty, violence and war, and to realise common projects of shared hopes.

I would like to end by reiterating my gratitude to our Father Founder Ramón Zubieta y Les, for his example of fidelity and dedication to God’s Project, in favour of the most needy, with a compassionate and merciful heart. 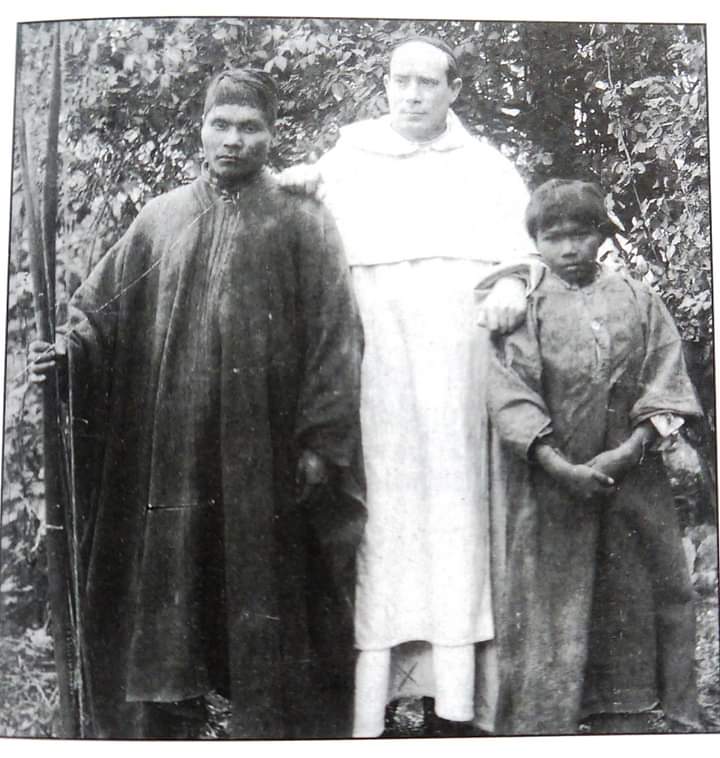